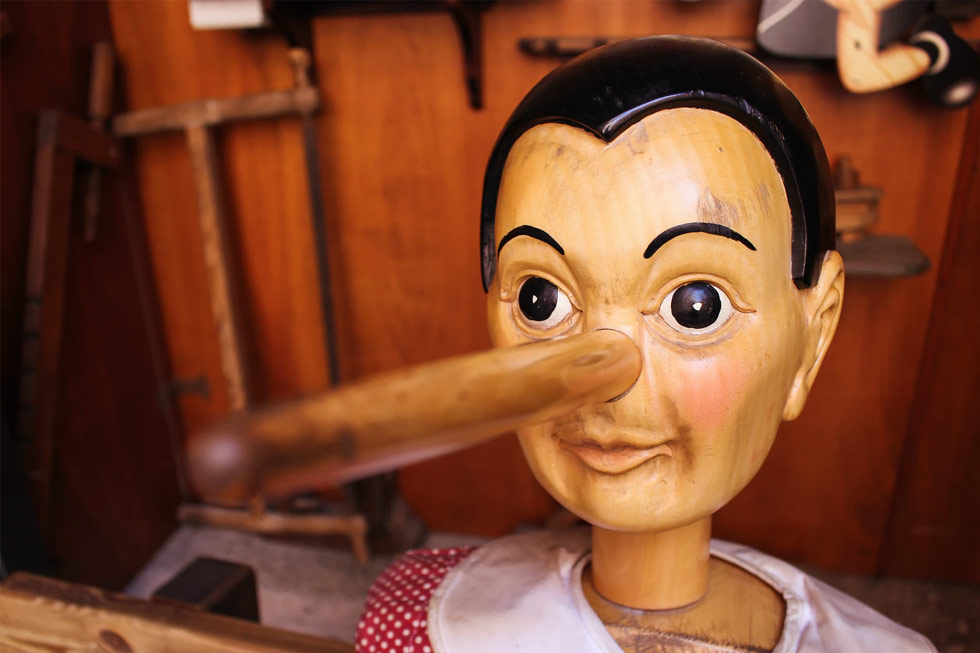 Before you begin to read this article, I want to point out that I study and follow the teachings of Pamela Meyer, Paul Ekman and Frank Byrnes. If you like their work or have not heard of these three people before then, you might like this article. There are a number of items that I speak to in the following article that are based on their findings and my experiences as a Mediator and a Conflict Resolution Practitioner.

Lying / Deception (I use both terms interchangeably) is a subtle and cooperative act designed to deliberately induce others in a belief that the deceiver knows is false. In this process, the deceiver attempts to give a false impression regardless if the other party is actually fooled. Deception has three important components. They are; intentional or deliberate, factual or emotional and expressed verbally or non verbally.

We are lied to because we agree to the lie. A lie has no power on its own, just the pure utterance of a lie gives it zero credibility. It only becomes credible when we choose to believe or accept it.  Research shows that people who are trained in detecting deception are accurate 90% of the time while people with no formal training are accurate 54% of the time. This is a very good statistical rate considering the level of knowledge between these two groups. When you consider the fact that lie spotters are armed with trained knowledge, experiences and have difficult conversations with difficult people in sometimes difficult environments, the percentage of accuracy comparisons are even more impressive.  So, why is it that the percentages are impressive? The reason is that we are against lying but, covertly support it. Frank Byrnes (President, HPCI) has stated that we are naturally born “truth tellers” and the art of lying places a tremendous amount of stress on the physiological elements of our body because as a society we place a high degree of value on honesty, trust and transparency.

So, why do people lie? Dr. Paul Ekman (Psychologist, University of California) in his research states that people lie to; avoid punishment, conceal rewards or benefits, protect others or themselves, avoid embarrassment, be polite or for the thrill of lying. The fact of the matter is – no one person really knows why people lie, they just do. Dr. Pamela Meyer (Certified Fraud Examiner & Entrepreneur) has stated on several occasions that the power of deception is in our willingness to accept the power of the lie because it gives us something that we are hungry for.

Whether we are hungry to be richer, more influential, nicer, better business people, more respected, more powerful, more accepted by others, be liked by others, law enforcement officials need to make an arrest, government people need to pass legislation, and so on – and so on….………….lying is an attempt to bridge that gap between our fantasy and our reality. In the words of Henry Oberlander, (the leader of the Hungarian Circle who defrauded millions of dollars from international banks from 1966 – 1978) “everyone is willing to give you something for whatever it is they desire the most.” That is the focal point of deception; if you don’t want to be lied to then you must identify and minimize your hunger points.

Some lies are benign (little white lies) they hurt no one nor do they call into question credibility while others are malignant. Serious and hurtful these lies can hurt innocent people and cause a great deal of pain. Corporate America encountered just over $ 997,000,000 in corporate fraud last year. Millions of Americans were hurt through embezzled funds, failure to tell the truth and out right theft. Others have had their jobs compromised as well as their health and safety through lies and with holding of information.

Statistically, according to the works of Pamela Meyer we lie to strangers three times within the first ten minutes; we are ten times more likely to lie to strangers than to people we know; extraverts lie five times more than introverts; men lie eight times more about themselves than they do about others; women are twice more likely to lie to protect others than themselves; married couples lie once in every ten interactions while partners lie once in every three; children lie once in every five interactions and last but not least; in reality we are lied to ten to twenty times per day. Lying is part of our society and it is an accepted practice. As a society we are against lying while being ambivalent about the truth.

There are four classifications of deception; Fabrication, Half Truths, Implicit Falsification and Altruistic Playing.

Fabrication is considered to be out right lies with absolutely no truth at all and done with the full intent to deceive and / or dismiss the other party.

Half Truths are truths mixed with fabrication with the intention to paint a favorable outcome for the deceiver. This type of deception can also be altered to a new subservient level which I call Opflation. Opflation is known as the art of combining facts with opinions and developing that process into fabricated facts to the point that they become a crafted reality. Both fall under the Half Truth category.

Implicit Falsification is misleading answers without actually being a lie.

Altruistic Playing is something that is told for the benefit of someone else.

All four of these deceptions have one thing in common – they are done to gain an advantage over the other party in order to manipulate the outcome and relationship.

Detecting deception comes from the deceivers details, cooperation, enthusiasm and self defensiveness (aka thorough infuriation). As a youngster we are good at detecting deception however, as we aged we became terrible in comparison. That is because we learn to filter information, we stop observing and our biases “kick in”. When we are young we observe truthful behavior and look for departures. As we age our filters look for reasonableness and closure while departures become secondary. Departures are and always have been a “red flag” for successful deception.

The Viji and Semin study in 1996 and DePaulo and Morris study in 2004, concluded that Prisoners were far better equipped to detect deception than Prison Guards, Customer Officers, Law Enforcement Officers and Human Resources Professionals. The reasoning behind these observations were that Prisoners held less rigid beliefs in verbal and non verbal cues and more emphasis was placed on detailing and departures. Also the consequences associated with making a wrong decision were much more severe.

Having said that, I am a true believer that detecting deception center around four key principles. They are verbalization, detailing, distancing and leak face.

Deceivers have a unique quality of putting words in an authoritative manner. An example of this is when I was mediating a dispute in Calgary, Alberta over a promised twenty hour overtime period that was not paid. When I questioned the supervisor he stated that he did not speak to the employee about overtime on the weekend. He clearly stated; “ I did not talk to Jim or anyone for that matter about weekend overtime”. When I spoke with the manager he said; “listen to me because I’m only going to say this once, I absolutely in no way told Jim that he was entitled to overtime. I have better things to do with my time than speak to employees about their overtime. That’s a little beneath my job scope.”

As I probed, I quickly discovered that the manager was not as honest as he could have been.

Deceivers have the ability to use out of character words. Another way verbalization takes place is when an event occurs where people use words that are not necessarily associated with their character or demeanor. In other words, words that are not related to their regular conversations. Examples of such might be –  determine vs ascertain; embarrass vs besmirch; not sure vs ambivalent; slander vs vilify, etc) These are red flags to me are ought to be probed with in depth questions.

Deceivers tend to pepper their stories with fabricated details. Truth tellers are people who get to the point and are factual. Their recollection of details are provable in some shape or form whereby, deceivers add fabricated details that are presented in strict chronological order with the intention of improving their position. As a listener I do three things. One, let them talk; two, look for gaps (and there will be a number of them) and three; ask them to tell their story backwards.

Deceivers unconsciously distance themselves from the subject by employing distancing language as a tool. Examples of this will be….”that man….”, “to tell you the truth……”, “in all honesty…….”, “can I be candid with you….”, etc.  My experience tells me that probing with open focused questions allow you to draw more related answers. Also, questions that are phrased with “EBO” (Event, Behavior, Outcome) in mind bridges the distancing gap. An example of this would be; “tell me about a time that you had to face a hostile aggressive person in the workplace – what did you do and what was the result of your actions?

A term made popular by Frank Byrnes (Fraud & Murder Detective & Consultant) Leak Face can be a key indicator. Sometimes referred to as body language, Byrnes says that even Murderers are known to have Leak Face. Science has surfaced many indicators that will enable us to detect Leak Face. Some indicators might be eye blink rate, barrier protection (objects place between the interviewer and the other party), body pointing towards the exit, altered vocal tones, abnormal voice calibration, withdrawal, looking down and answers are closed.

These behaviors on their own are not proof of deception however, to me – they are indicators of deception. Looking for clusters of the aforementioned Leak Face signals are key indicators associated with the fact that something may wrong.  Look, listen and probe in order to break the strict chronological order that is being heard.

Get others out of their comfort zone by asking the hard questions, painting a picture in your mind as to how things ought to unfold, staying in the curiosity mode and establishing rapport with the other party through respect and dignity. Caution – do not be aggressive by pummeling the other party or losing your emotional intelligence level because this will make the other party angry and if anger turns to contempt; you have lost them. Again, be polite, professional and respectful.

It is important to realize that we can never be 100 % certain that a person is deceiving us. For anyone to say that they are perfect in detecting deception would be false. The more skills and experience we acquire, the higher the degree of  certainty. We may be wrong at times but, we will never be in doubt.