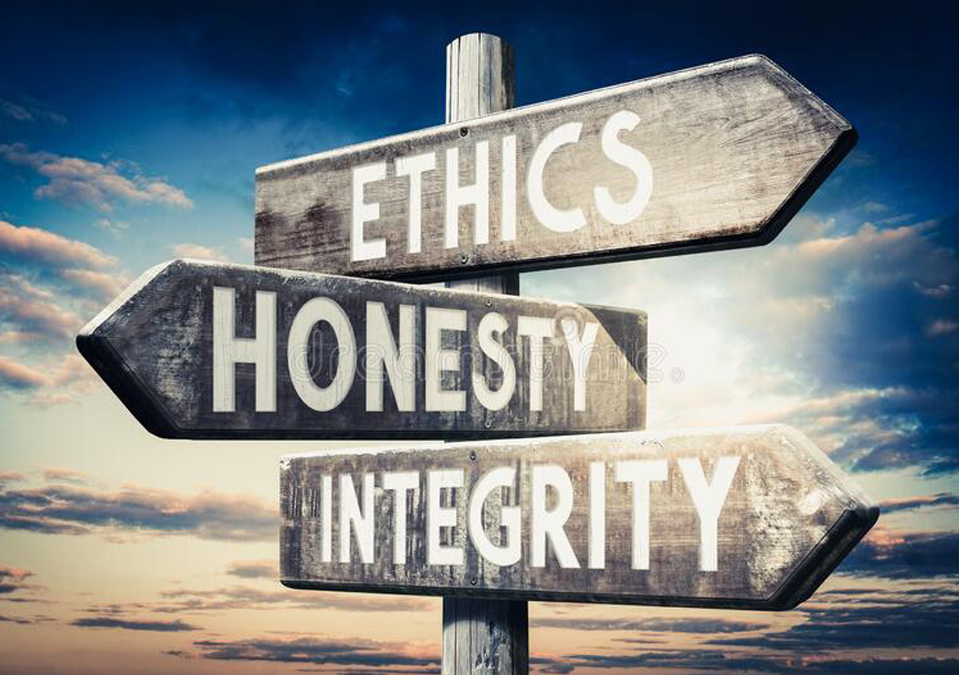 Integrity is defined as the quality of being honest and possessing a strong moral compass. Embedded in the fabric of integrity is that a person with integrity behaves ethically and does the right thing for various reasons. The late Jack Welch, spoke about candor as being the leadership quality in the year 2000 and as true as that may be, candor although still very much a critical

leadership element has been replaced by INTEGRITY. Dr. Lewena Bayer, International Civility Expert from Winnipeg, Manitoba says; “having integrity as a core leadership value means you never stop learning. Setting and achieving your own standards of behaviour means that you were accomplishing things for your own sake, because they are right and they need to be done not because someone told you to.”

Generally speaking, there is a growing recognition throughout all organizations that business integrity is vital. In part, this is in response to an increase focus on ethics by legislators and regulators as well as, consumer preferences with the wider public ascribing to the increased importance of environmental, social and governance factors when making investment decisions. Another contributor to business integrity is an organization’s growing recognition that business integrity is good for business because it is the practice of incorporating ethical behaviours throughout the organization. These are all givens and is widely taught throughout any and all corporate governance programs offered at the college and university level.

In this publication, the focus is on leadership integrity, otherwise referred to as personal integrity. It has often been said that strong leaders have integrity. Leadership integrity refers to being honest, being trustworthy, transparent and reliable. Leaders with integrity act in accordance to their words, they practice what they preach, they own up to their mistakes as opposed to hiding them, they don’t blame the team, they don’t make excuses, they follow company policies and protocol and they respect each other whether it be their peers, direct reports or boss.

“Having integrity as a core leadership value means you never stop learning. Setting and achieving your own standards of behaviour means that you were accomplishing things for your own sake, because they are right and they need to be done not because someone told you to.”

Cultivate a strong reputation: a strong reputation is the base of leadership integrity and is based on more than just performance. A strong reputation also stems from being perceived as honest, responsible, reliable and respectful of others, coworkers, direct reports and your boss. Remember that while it takes time and effort to build a strong reputation, it is easily damaged by negative behaviour. A leaders behaviour also influences the company’s reputation – it is especially important to always act responsibly and ethically; this in turn creates a high level of integrity.

Consistency: people have difficulty and little faith in a leader who is not consistent in their actions. An example would be saying one thing but doing another. A leader’s words and actions should always match. Similarly leader behaviour should be in line with the organizational values and policies in order to send the right message to all that you influence. Consistency and integrity go together like salt & pepper because leaders who consistently act with integrity inspire others to follow their example.

Holding yourself too high standards: Edgar Allan Poe (American writer, poet, story teller, editor and literary critic) once said; “the toughest leader that a person will ever work for is – themselves.” Leaders with integrity do what is morally and ethically correct by avoiding questionable practices. When making decisions leaders with high standards consider potential consequences on the organization as well as consequences on others., Acting with integrity also includes working diligently rather than taking short cuts. It means accepting responsibilities for decisions and being transparent with coworkers, direct reports and your boss.

“the toughest leader that a person will ever work for is – themselves.”

Set a good example: as a leader it is your responsibility to be a good role model for all people within your sphere of influence. Engaging in negative workplace behaviours such as gossiping about others, using company resources for personal matters or sidestepping company policies; sends signals that this is acceptable behaviour. This will lead to other consequences. Employees who lack integrity are more likely to engage in unethical and counterproductive behaviour which hurts the work environment and the company. It’s a follow “the leader” type scenario where direct reports follow their leaders and accept their behaviour as being the “norm”. That being said; leaders who act responsibly, make ethical decisions and uphold company values help set and maintain expectations for employee conduct while creating high ethical standards.

Honour your commitments: it is challenging to earn trust and respect from direct reports when you come across as being unreliable. Direct reports want to know that if you make a promise; you’ll keep it. This includes meeting deadlines, holding yourself to your word and fulfilling commitments to coworkers, direct reports and most of all your boss. Recognize your limitations and don’t overcommit. It is far better to say no than it is to fall through the cracks by not falling through on a promise.

In summary: integrity means understanding, accepting and choosing to live in accordance with one’s own principles and values which will include honesty, fairness and decency. A leader of integrity will consistently demonstrate good character by being free of gossip and hypocrisy. The golden rule of of integrity is “do onto others as they would expect you to do” and the three key elements are communication, consistency and completeness.

Nicholas Pollice is President of The Pollice Management Consulting Group located in Niagara, Ontario, Canada. An international facilitator, presenter and consultant, he is known as an operations management leader and coach. Nicholas conducts programs in leadership, supervision, communication, negotiation, conflict resolution and strategic planning. He has been a international consultant since 1989 and is the author of several professional publications. His presentations have been consistently ranked in the top 10% throughout North America. See Nicholas’ bio, his other publications and services on the PMCG. Website at www.pollicemanagement.com